My cochlear implant odyssey continues, and today the subject is auditory memory.  I have written about this before - in my book, Listening Closely: A Journey to Bilateral Hearing. 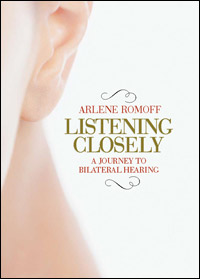 Auditory memory can be defined as "the ability to process information presented orally, analyze it mentally and store it to be recalled later."  In Listening Closely, I described the most amazing occurrence when I had just gotten my new upgraded CI processor, which had better capacity to represent pitch and music.  I was playing a Chopin Nocturne, a piano piece I had originally played as a teenager - and rather than branch out to master new music, I preferred to play this familiar work over and over, just altering the tempo and phrasing. The moment I played it in a very slow and mournful way, my brain immediately informed me that was the way I had played it on the day President Kennedy was shot, 45 years before!  (I don't bother writing about things unless they are truly newsworthy!)  My brain was absolutely right - that was exactly the way an impressionable teenager coped with the enormous emotions that day, by playing a mournful rendition of that romantic piece. So much for my auditory memory - and the power of cochlear implant technology to replicate that piano sound so accurately as to trigger that long-buried memory!  If you'd like to find that passage in the book, it's on page 82, in the section entitled, of course, "The Persistence of Memory."
Fast forward to yesterday - and some of my new "toys."  I had just purchased Bose high quality "Quiet Comfort 15" headphones that had been recommended by some of my techie CI friends.  They would fit over the "t-mic" microphones of my CI processors, while providing the best sound quality available.  I had just gotten a brand new iPhone, too, so I could plug these headphones right into that device.  I wanted to do more music  listening and practice, to develop my listening skills even further - and also to listen to speech as well, also as practice.
Here comes the fun part.  I was discussing all this with my husband, and showing him how the headphones would fit right over my t-mics, when I suddenly shouted out "CAP-TAIN VID-EO," with a robust intonation that I hadn't thought about in decades.  Readers of a certain age will know that Captain Video was a TV show in the early 1950's - so early, in fact, that I don't even remember watching it.  But I evidently did remember how the announcer pronounced the name of the show -  "CAP-TAIN VID-EO!" - with a certain rhythm and tonality.  Now that is auditory memory!  And for those who don't remember, or aren't old enough to know, Captain Video - listen to the beginning of this YouTube recording of the beginning of the show - and pay attention to how the announcer says "CAPTAIN VIDEO!"
Click here to watch the beginning of the Captain Video Episode
Now comes more fun stuff.  Here are two pictures of what Captain Video looked like, along with his Video Ranger: 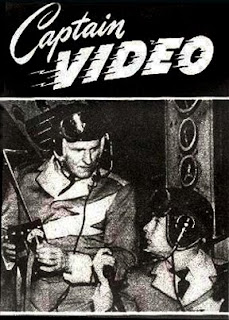 And here's what I look like with my new Bose headphones, that triggered that auditory memory!


Now, you can really appreciate the impact of speech and hearing in children.  I was so young that I don't even remember watching this program, but the sound of that show evidently made an impression - and an auditory memory - over five decades ago.

And the interesting part is that Captain Video was all science fiction - but Bionic Arlene with her Bose headphones on her bilateral cochlear implant processors - allowing this deaf person to hear music in stereo - is most definitely science reality.
Posted by Arlene Romoff at 9:01 PM