This is the studio at LTV 20 Easthampton Long Island, recording the "ACCESS with Richard Rosenthal"  talk show now airing in June and July. We were going to do one 28-minute show, but we had so much to discuss, we ended up doing two shows, which will air separately.  See this link for show times -  http://www.ltveh.org/index.php?option=com_content&view=category&layout=blog&id=11&Itemid=7

Richard Rosenthal lost much of his hearing during WWII, attended Oxford University on the GI Bill, and has been an advocate for people with hearing loss for a long time.  With his experience, he knew just what questions to ask, and we covered all sorts of topics relating to hearing loss - my two books, advocacy, assistive devices, cochlear implants, hearing aids, psychosocial considerations - and I seemed to have an opinion on everything!  Next step is getting these programs up onto YouTube - with captioning!
Stay tuned  . . . .
(Here's the link - now available)
http://www.youtube.com/results?search_query=arlene+romoff&aq=f 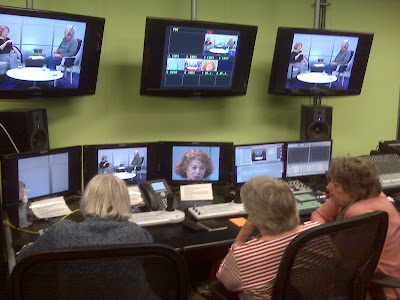